For over thirteen years, CEO, Cheryl Kingston (under her maiden name, Gibbs) has had a weekly newspaper column in The News in Portsmouth; the South Coast’s largest newspaper. She’s written a full page newspaper column every Friday which is a personality led column about.. well her life! Having traveled all over the world reporting about exciting places and things to do her newspaper column has a printed circulation audience of 35,000 and the paper has an online audience of 750,000 and 3/4 million views per month.

We had such a wonderful day at Marwell Zoo last week. 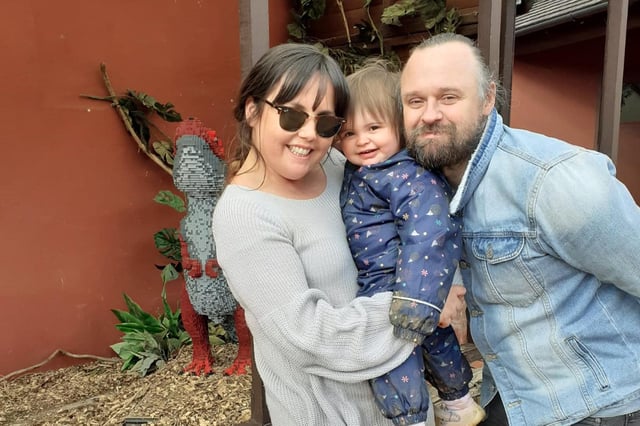 The sun was shining, the sky was blue, Harley was in a good mood and it was Matt’ s 41st birthday.

We took Harley to Marwell after the first lockdown and before the second, but she was so young then that I guess that visit was more for us than for her.

But this with her being that much older and observant she absolutely loved wadding around the park, looking at the animals with such curiosity that it made me brim with pride.
To be honest Harley was enjoying herself from the car park – she just loves to be outside. Throw some gravel and stones in and she’s got herself a party, but I found it fascinating to watch her as she tracked the animals with her eyes watching them and taking them in for the first time.

I know I should have been looking at the animals myself, but I was just amazed at how she took it all in.

Being a parent and watching your child observe everything for the first time is such an honour.

It gives you that ‘first time’ feeling too because you’re seeing it through their eyes again and when you do that you do realise how truly amazing life is.

Something like the meerkat pen or the penguin zone is quite an adventure to a fifteen-month-old and we just had the best day.

Unfortunately all the indoor arenas were closed which was a real shame as I do recall Harley loving the Tropical Garden last time.

I was really hoping to see how she reacted to the giraffes up close and personal. We did get to see one outside and we managed to do the obligatory photo of Harley against the giraffe measurement board – a must for all parents.

We didn’t end up leaving the park until 5pm – needless to say we all slept well that evening.

A fantastic day had by all.

We went out for first time in ages, and went home early…

We went out on Friday night for Matt’s birthday.

My mum had Harley overnight and we went out for the first time in god knows how long.

Like the rest of the country, we were so excited to just sit somewhere that wasn’t our own backyard. It did feel amazing to be outside however I needn’t have spent long getting ready because all I ended up doing was covering my outfit with a massive puffer coat; the same coat I took to Finland and Sweden a few years ago when I was filming in -27 degree temperatures.

However I was still cold outside and when the sun completely went in I felt way too cold. We soon got a takeaway and went home…

Everything that could go wrong, then went wrong…

We had one of ‘those nights’ on Tuesday evening.

It started with Harley knocking over a drink all over cream carpet which stained. Then an entire crate of Diet Coke cans fell from the top of the fridge down on to the floor, exploding everywhere and all over the kitchen.

I went outside to water the plants in the garden and the end of the hose pipe exploded off the end, smashing straight into my leg and getting me soaking wet (this was after having had a bath and in my PJs).

We finished the night by loading the dishwasher and a plate smashed on the floor and Matt ended up with a cut leg.

Needless to say we decided to go to bed early…

Cheryl is an energetic and engaging person with a special abilityto connect with a TV audience. She also has a goodunderstanding of an audience's needs and demands, across abroad type of profile.